skip to main | skip to sidebar

The face in the mountain

A few days ago I stopped in Mount Shasta, a small town close to the magnificent mountain with the same name. There was some kind of street festival going on and I mingled with the locals. I was suprised to see many new age shops. Surely the spiritual needs of the local people could be met by one shop and a dozen churches of different orientations. I met a guy who had a spiritual talkshow on the local internet radio. He told me you could clearly see a face on the mountain surface. Since it was already dark I couldn't see it. He showed me some pictures of the mountain, but you needed a lot of imagination to see a face in it. Imagination is something those spiritual relief seekers in general don't lack. He told me to go to a shop where they have the 13th maya cristal skull. My curiosity got the better of me so I went there. The woman in the shop told me mount Shasta is exactly opposite Tibet and is one of the earth chakra's. A lot of people come here to yeah, to do what exactly? She also told me some things about this 13th cristal skull (I only knew those skulls from the last Indiana Jones movie), apperantly it can change shape. I asked her where it was. The woman said you can only see it on appointment. Ofcourse, I could have guessed that.

Next day was a clear day, the first time I saw Mount Shasta summit. I tried to see a face in it, pinching my eyes a bit, but nothing. It was only on the highway going south, leaving the moutain behind me, that I saw in my rearview mirror the face of Elvis. 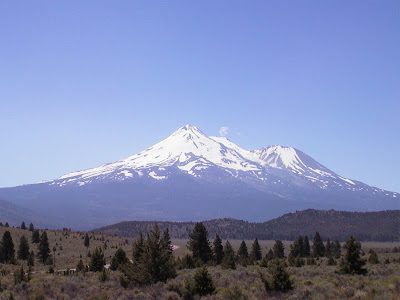 You have to be blind to not see a face in this mountain.
Picture from the internet by I don't know who

Kurt
I use this blog to post my old travel stories and from now on new stories, not specifically about travelling but things that wonder me and about my experiences in the organic community in which I live now . You can find more pictures on my flickr site.